COVID-19 Update – orders and deliveries will continue as per normal. Please do not over-order as it is completely unnecessary and may deprive others of important product. 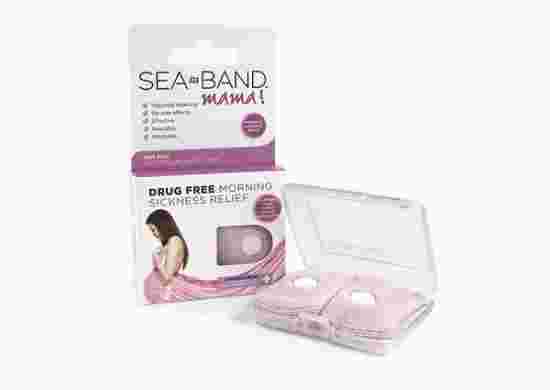 Many expectant mothers suffer from morning sickness and most find their symptoms ease at around week 14, but for an unlucky few nausea and vomiting may continue throughout the pregnancy. Scientific studies have proved that one of the most effective drug-free treatments is Acupressure on the P6 (Nei-Kuan) point between the two central tendons near the wrist.

In the UK, acupressure was first scientifically proven useful for this condition by the late Professor John Dundee from Queens University, Belfast. An Italian study has also found that morning sickness was reduced in 70% of women who used Sea-Bands.

The plastic stud on Sea-Bands applies continuous pressure on each wrist preventing or relieving the feeling of nausea.


How to Position Your Sea-Bands

Here’s how to find the acupressure point (called The Nei-Kuan Point).  Place your middle three fingers on the inside of your wrist with the edge of the third finger just below the first wrist crease. The Nei-Kuan point is located underneath your first (index) finger in-between the two wrist tendons.
Position the plastic stud facing inward over The Nei-Kuan Point. Repeat for your other wrist. One band must be worn on each wrist to be effective.

Sea-Band takes between two and five minutes to become effective.  A better result is achieved if the band is in place before your nausea commences. Greater relief can be gained if necessary by applying extra pressure to the plastic stud.

Having trouble logging in?

If you are an existing customer, you should have received an email containing your new login details.

If you have not received this email or if you are having problems logging in, reset your password using the link below or contact us.

You can only sign in when you have an active internet connection.